Music Director and Founding Conductor of Cleveland Pops Orchestra, Carl Topilow, will bring Broadway and Beyond to the Powers Auditorium. Joining Topilow and the YSO is guest vocalist Connor Bogart, a classical violinist since the age of five, studied opera at the Eastman School of Music in New York and has since toured the globe as a professional performer.
Purchase Tickets 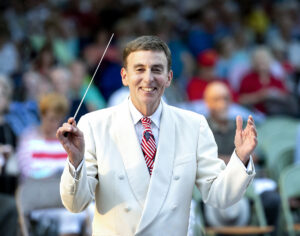 This year Carl Topilow will be celebrating his 25th season as Music Director and Founding Conductor of Cleveland Pops Orchestra. His eclectic programs, including the music of Broadway, Hollywood, jazz, rock, and light classics, have been critically acclaimed by audiences and critics alike. Topilow enjoys a dual career as both conductor and clarinetist, usually finding an occasion to perform a selection with the Pops on one of his brightly colored clarinets.

Topilow has performed as guest conductor with 125 different orchestras in 37 states and 12 foreign countries. His travels this past season took him to the Allentown Symphony, Charlotte Symphony, Florida Lakes Symphony, Fort Worth Symphony, and Lake Charles Symphony.

Recently named Faculty Emeritus after 37 years as Conductor and Director of the Orchestral Program at the Cleveland Institute of Music, Topilow continued as principal instructor of the master's program in orchestral conducting for two additional years

A classical violinist since the age of five, Connor Bogart (Connor Bogart O'Brien) studied opera at the Eastman School of Music in New York, and has since toured the globe as a professional performer.

A native of Northeast Ohio, Connor decided to leave the violin behind to study vocal performance/opera at the prestigious Eastman School of Music in New York (U. S. News and World Report ranked #1 Music Conservatory in America 2010-2012) under the direction of Dr. Robert McIver. During his time at Eastman, he also auditioned for, and was subsequently accepted into the nationally ranked male acappella group, The University of Rochester Yellowjackets, (as seen on NBC's "The Sing Off") as a featured soloist. After recording several award winning albums with the group, a love of singing without instruments took hold and in subsequent years led to executive producing future Yellowjacket albums and being a national finalist for the world famous vocal band Rockapella in their search for a new second tenor.

Connor has been a featured soloist with the National Repertory Orchestra, The Cleveland Pops, The Symphony of Southeast Texas, The Detroit Symphony Orchestra, The Rochester Philharmonic, The Toledo Symphony, The Mansfield Symphony, The New Haven Symphony, The Akron Symphony, The Rappahannock Pops, Music In The Mountains (The Dallas Symphony), The Fireland Symphony, and the Cleveland Orchestra. He has served as executive music supervisor and composer to The Discovery Channel for their series, The Kustomizer, and as a songwriter, had had several of his original songs featured on national television.

"Inside Out", the lead single from his self titled first album, vaulted to the number one radio position in France, and held the position for several weeks. Two full-length albums followed, "Soliloquy" which featured a cover story in Scene Magazine, as well as the hit single "Ready To Fall", a national semi-finalist entry in Sony Music and Clear Channel's "Radiostar" competition hosted by Ryan Seacrest and KISS FM's Elvis Duran. His third album "Prizefighter" is his latest rock release.

He has since toured the U.S, and along with his band, has performed as the opening act on over 20 national tours, including Ashlee Simpson, Huey Lewis and The News, Edwin McCain, Richard Marx, Rick Springfield, Hall & Oates, and Mariah Carey.

Connor can currently be heard behind the scenes singing and recording jingles for companies such as Hasbro Toys and American Greetings, performing on tour with native Clevelander and Grammy nominee Jim Brickman, as well as in over 32 countries worldwide as a headlining act on Princess, Holland America, Celebrity and Royal Caribbean cruise lines with his previous group of Broadway veterans, "The Matinee Idols", and his current solo show available in both English and Mandarin Chinese.